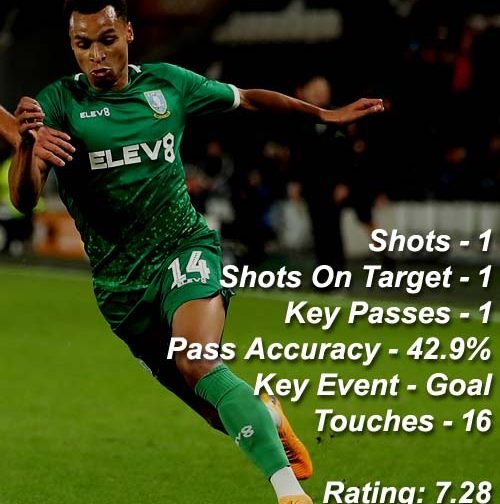 Jacob Murphy came away with a lot of praise from some Sheffield Wednesday supporters after the Owls won 2-0 against Leeds United on Saturday.

The 24-year-old got on the scoresheet, breaking the deadlock in the 87th minute with a rifled effort at the near post, but he was duly lauded for his overall contribution too.

Jacob Murphy has been brilliant in the last two games #swfc

#SWFC …and well done Murphy on his best game for us

Murphy was superb today, even before the goal #swfc

Back from L**ds. Tremendous performance from #swfc . Organised, disciplined, committed and hard working. Took our chances when we had them. Murphy had his best game in a Wednesday shirt. But wrong to pick one out from a great performance. Lovely to hear Elland Rd library 😁👍

Against Leeds, Murphy played for 90 minutes, made 34 touches, won one aerial duel, completed 71.4% of his 14 passes, made one clearance, whipped in two crosses, made one interception, had two shots with 50% accuracy, made one tackle and made four successful dribbles.

Since joining on loan from Newcastle, the former England u21 international has made 23 appearances in all competitions this season, scoring three goals. Murphy has struggled with inconsistency and has only started half of his league outings, but he’s proven his worth in recent weeks.

Garry Monk could be on the hunt for another winger before the transfer window closed, having been linked with Southampton’s Josh Sims, but Murphy is showing his manager that he can be an asset for Wednesday. The Owls next face Blackburn Rovers on Saturday.