Sheffield Wednesday will be without 28-year-old against Charlton Athletic, here’s why

Sheffield Wednesday will be without Julian Borner against Charlton Athletic as the 28-year-old has picked up a one-match ban. Borner picked up his fifth booking of the season in Wednesday’s 1-1 draw with Birmingham City and has been given an automatic suspension as a result. 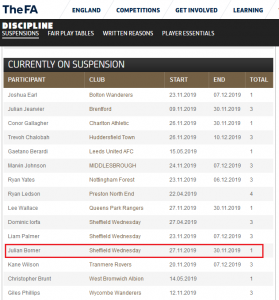 Tom Lees replaced the centre-back at half-time against City and should deputise for Borner over the weekend – the 29-year-old is likely to start alongside Dominic Iorfa.

Borner will be missed as he’s been a regular at the heart of the defence this season, making 16 Championship appearances and racking up 1395 minutes of playing time, but Wednesday haven’t been in the best form of late.

The Owls are winless in their last five games and are without a clean sheet since October, so how damaging will his absence be?

Lees is the club captain and was given 45 minutes against Birmingham, so he should be ready to start despite a previous a lack of playing time – injuries had limited the former England u21 international to just two league appearances in the last three months.