With a loss and a draw sending Sheffield Wednesday into the November international break, Garry Monk was looking for his side to return to winning ways but a trip to West Bromwich Albion was never going to be easy.

Slaven Bilic’s side sit top of the second tier table and are two points clear, so this was always going to be an incredibly difficult game at The Hawthorns.

The hosts took the lead ten minutes in, but with a mixed performance from both sides on the day, we got a deserved leveller just ahead of the hour mark as Steven Fletcher struck from the penalty spot, but with the referee evening up the penalty decisions with two minutes remaining in the game, they nicked it and all three points.

Two minutes into stoppage time we were reduced to ten men as Liam Palmer saw a straight red, but given the relative chances there will be those who feel we were robbed and those who felt we were incredibly poor.

Speaking to the BBC following the end of the game, Monk said of our efforts on the day.

“I feel sick for the players. To come to the league leaders and play that well and get nothing. The first-half was even, but the second we were the better team. To create that amount of chances and not win. How we’ve not won that game, let alone not take any points is astounding. Everything in terms of performance is there apart from being ruthless and clinical. We can’t continue in that way. So much of that game was exactly what we needed it to be. We’ll stick together and if we continue to perform like that, results will turn for us.”

Were Wednesday Unlucky Here Or Not? 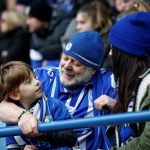 Deserved At Least A Point